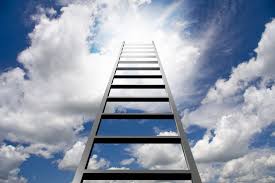 The Ladder of Abstraction is one of my favorite concepts in helping  write something worth reading. Whether writing an academic paper, a facebook post, or a poem, to some degree you might already use the ladder of abstraction without to better your writing. However, understanding the concepts helps you revise and think about your writing in new ways.

Before we get to this ladder, lets define a few concepts. First, the word “abstract”: according to google’s online dictionary, the adjective abstract means “existing in thought or as an idea but not having a physical or concrete existence.” Abstract ideas are the big ones. These are concepts that you can’t touch or taste–they have to be visualized.  Love, justice, honor, beauty, freedom, grace, wealth, kindness, truth, happiness etc. If you can put the words “what is” in front of the word and write a whole book about it, it’s pretty abstract.

Second, we should define abstract’s antonym, “concrete.” Again, according to google, concrete means “existing in a material or physical form; real or solid; not abstract.” Concrete words are tangible things we understand through our senses. The keyboard I am writing this on is a concrete object. The keys in my pocket. The spicy gumbo I had at the potluck I went to last night.

The Ladder of Abstraction 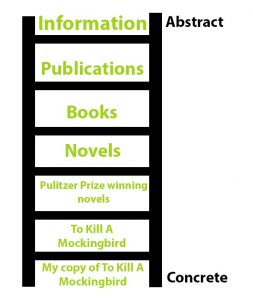 Okay, now the Ladder of Abstraction, a concept that was first coined by S.I. Hayakawa in his book  Language in Thought and Action.  Hayakawa observed that writing can be broken down into it’s abstract and concrete ideas, and a ladder helps to show various levels of abstraction. For example, in the picture above, the most concrete is a specific tangible thing: my copy of To Kill A Mockingbird. But as you go up the ladder, the thing gets more and more general, and encompasses more and more things.

The animal classification system is a good example of a ladder of abstraction: 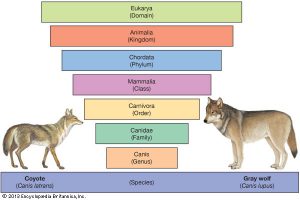 The Domain is much more abstract, the species is the most concrete. Although if you saw a specific wolf, you could get more concrete, even then the classification system. If you wanted to discuss the merits of all living creatures, that would include wolves, and would be more abstract.

Lets say I go on a walk at the Mendenhall Glacier, in Juneau Alaska, my home town. The year is 2006. It’s winter time, and out across the lake, I see a wolf.

“Hey look, that’s Romeo!” I say. (If you’re interested, read more about Romeo here). Romeo was a specific wolf, one individual being, the lowest rung on the ladder of abstraction.

“I wonder what kind of wolf Romeo is?” I might ask myself. I head over to the periodic table, and find out that he’s a gray wolf species. There are lots of other gray wolves in the world, so this is a rung up on the ladder. I see that Romeo is out playing with neighborhood dogs. Why dogs? Well, next up the rung is his genus, canis, which includes dogs. They’re part of the same genus. Anyway, you get the picture.

Because abstract and concrete are two opposite sides of a spectrum, your ladder can have as many rungs as you want. For simplicity,  Hayakawa’s ladder had four rungs. 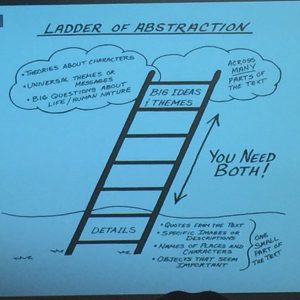 So why am I babbling on about abstract and concrete and this dang ladder?

One of the largest issues I see students struggle with is specificity. Your writing should have a larger idea or purpose–from that top rung–but should spend a lot of time illustrating and explaining that idea in the details, in examples. Quality writing touches the tippy top of the ladder, then spends the majority of its time in the concrete details, explaining the greater idea.

If you find that you’re spending too much time in the middle of the ladder, you’ll start sounding like a politician at a campaign speech. That might be good politicking. But it’s too general for the likes of us.

Strain, Logan. “How this Writing Tip from a Senator Will Punch Up Your Blog.”  SEJ.  https://www.searchenginejournal.com/writing-tip-senator-will-punch-blog-posts/129100/. Accessed 26 August 2017.